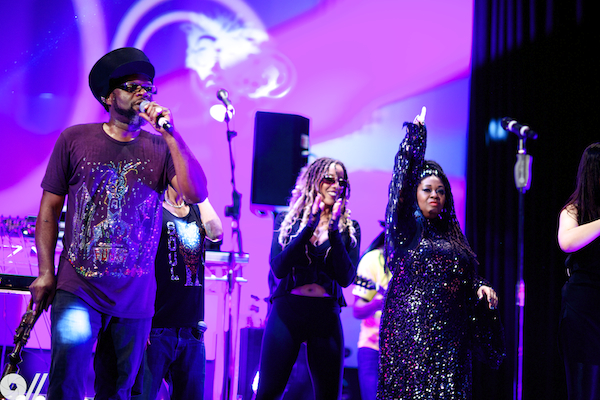 To paraphrase a quote by New Jack Swing master, Keith Sweat, “25 years and they’re still bangin’!!” Yes, Urban Soul trend-setters aka the Original Funki Dreds aka Soul II Soul are still around to put on an awesome show in London, nearly 25 years after stellar classics such as “Fairplay,” “Keep On Moving,” and “Back to Life” (the latter two lifted from their seminal 1989 album Club Classics Vol. 1), changed our musical soundscape forever after. And just to give you an idea of how long 25 years is, I asked the cloakroom attendant who the support act was for the evening. His reply – “I think it’s a band called Soul II Soul.” I rest my case.

So it was that Michael “The Dood” Edwards along with eight hundred or more thirty somethings crammed into the Islington Assembly Hall in anticipation of hearing some of those good ole thumpin’ 80s classics. We didn’t have to wait long. After three minutes of some typical bass heavy intro music, ‘The Movements’ chief Toaster and Guru, Jazzie B addressed the Funki Dred faithfull, “Islington, how are you feeling..? It’s good to be in your company this evening. The sounds of Soul II Soul as we do it on our own turf – Rare Groove Style!!! With that the beat segued into Soul II Soul’s original club classic, “Fairplay” and the crowd went ballistic! 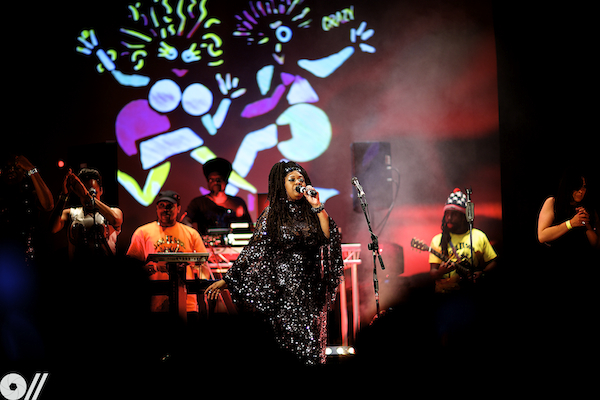 With that the band launched into “Get a Life,” one of two top ten hits from their “Vol II: 1990 – A New Decade” album. For the first time in the evening, Jazzie B sauntered out from behind the decks with his African ebony tribal cane clutched in his right hand as he began his monologue to the crowd.

Once Jazzie had retired to behind his familiar turntables, Caron Wheeler and a fresh, energetic vocalist named Boo exchanged vocal leads through to the end of the song.

A brief delve into their 1995 album “Believe vol. V” gave the crowd their first look at female vocalist Charlotte Kelly singing the lead off track from that set, “Luv Enuff.” This was followed by the effervescent Boo singing a track called “Bounce” which suited her high octane energy levels perfectly. 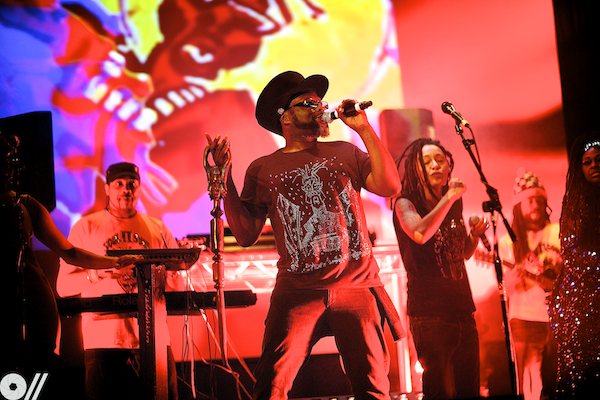 Jazzie B then introduced the MD and drummer of the Soul II Soul musical collective, Mr Adrian McKenzie aka the Chancellor to exercise his vocal chords for the first time in the evening with a rousing version of their feel good early 90s hit single “Joy.” 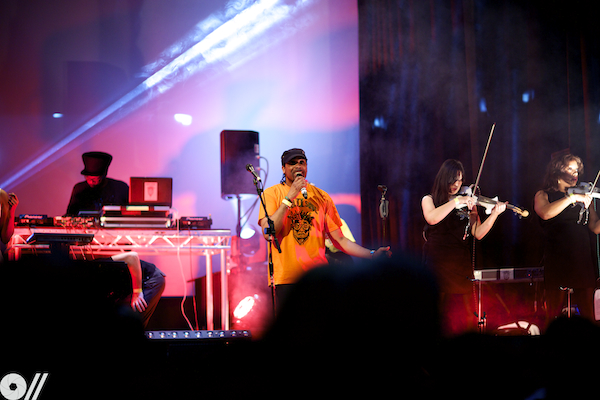 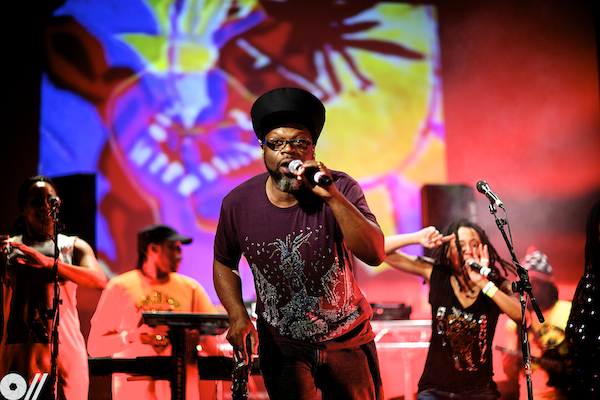 Big props go out to the two ladies on the strings for punctuating the tune with those familiar Soul II Soul electronic violin refrains. The Chancellor himself did full vocal justice to the song which originally reached number three in the UK charts in 1992.

From the familiar sing-a-long vibes of top 10 hit “Joy,” Jazzie B went on to introduce the more obscure album track, “Universal Love,” from their even more obscure 1995 release entitled “Vol. V – Believe.” However, no sooner had the mellow chords infused the air around us and Miss Caron Wheeler and Jazzie B began to deliver its positive and optimistic message, one wondered why it didn’t have a bigger impact on the charts. In fact, a re-release would be perfect in today’s social and political climate:

…cultures closely connected, all respected, none neglected
the dream of love which is universal must happen, then we will be one
bring down the walls…

… everybody listen make a change, negative attitudes rearrange,
join together forget the hate, the time is now we shouldn’t leave it too late,
colours never deceive me, one family people believe me,
brothers and sisters related
ancestrally who needs a barrier. 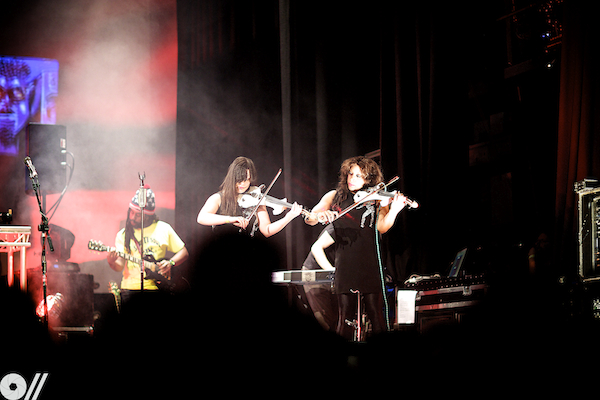 When Jazzie B came down from behind his mixing console, he delivered a Moses like sermon of universal love for all in his rich baritone voice, which actually imbued in us that the dream could become reality.

Caron Wheeler remained on the stage as the baseline kicked in to Soul II Soul’s seminal 1989 global club classic, “Keep On Movin” From the get-go the crowd were singing every word verbatim, which must have been sweet music to the ears of Jazzie B and Caron W. On the subject of Ms Wheeler, her striking floor length sparkling black evening gown glittered resplendently under the various fixed and strobe effect lights as she engaged her audience whilst delivering the impactful and infectious lyrics. 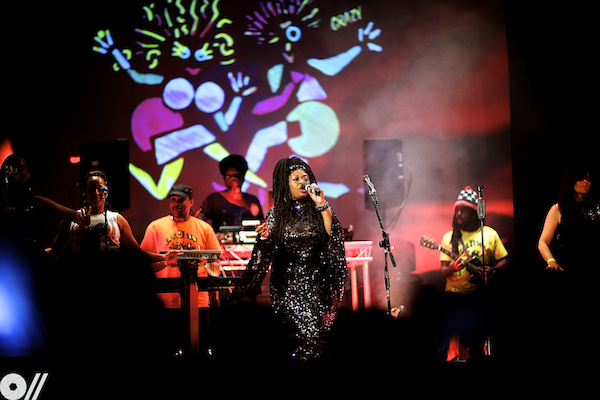 The energy inside the Islington Assembly Hall was electric, with both the artists on stage and the audience feeding off each other’s enthusiasm. This energy and enthusiasm was heightened still further when Jazzie B invited back Charlotte Kelly to take up the reigns to sing another stellar classic, “Missing You.” The knowledgeable crowd were fully aware of the shoes she had to fill in taking on this song voiced so beautifully back in 1991 by the one and only Kym Mazelle 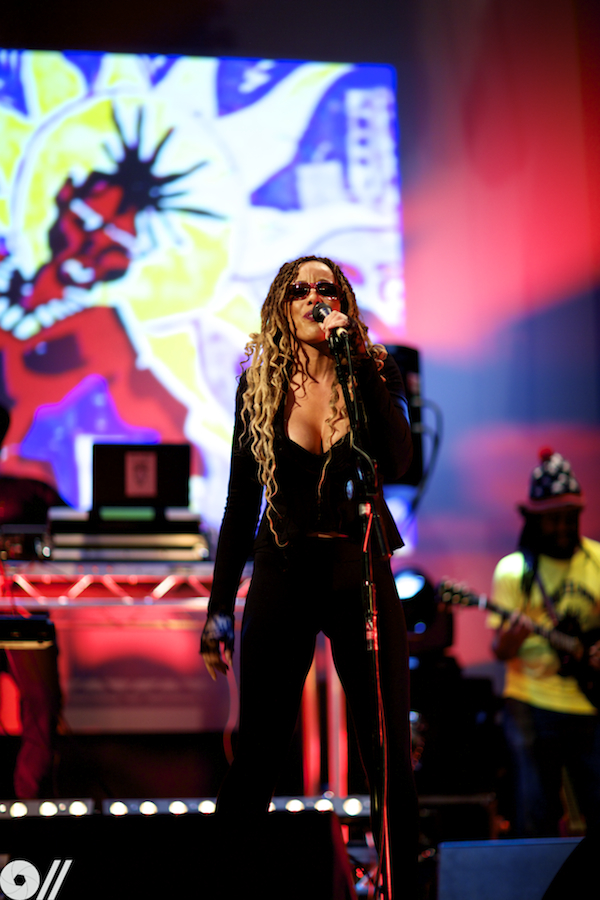 Very sensibly the young Ms Kelly did to attempt to compete with the powerful delivery of the original vocal, but the band, backing singers, together with a crowd high on nostalgia carried her through, giving Charlotte an uplifting round of applause at the song’s conclusion to show their appreciation.

Three more either new or unknown tracks followed, “Today,” “Move and Rock,” and “Make Believe World,” sung by Charlotte Kelly, Boo and the Chancellor respectively. Jazzie B took to the Mike once again to give props and a heartfelt thanks to Jr Morrison the writer the next tune “I Care. 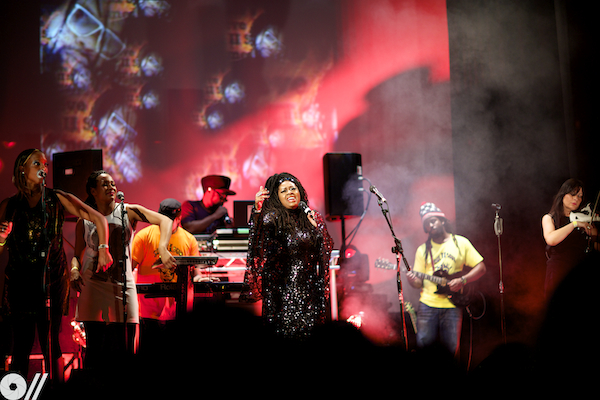 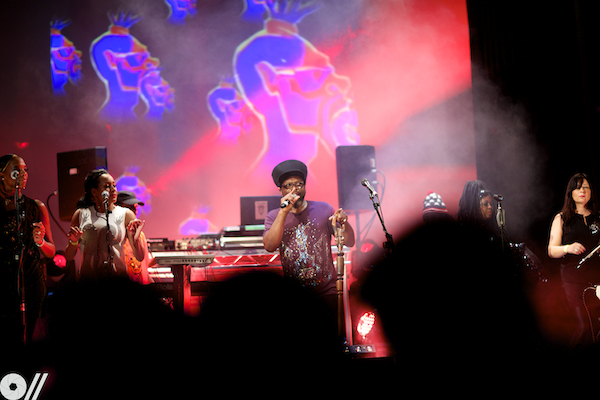 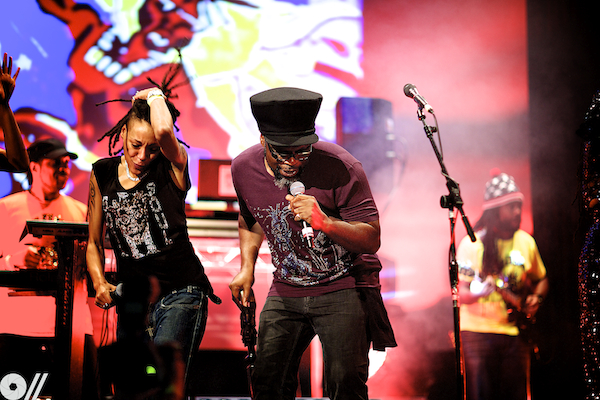 His gratitude was genuine as he bigged up Mr Morrison on behalf of both Caron Wheeler and himself for allowing them to perform what was obviously a very pertinent tune to them. This fact was compounded when Caron Wheeler strolled back onto the stage to give her own soliloquy which included a mention of her 17 years away from the recording business, before proceeding to give a great vocal performance on “I Care,” yet another unheralded tune, hidden away on their “Believe vol. V” album.

No sooner had the tune faded away, almost in unison Jazzie B and Caron Wheeler extended their thanks and appreciation to all those in attendance for coming out before casually meandering of stage followed by the rest of the band. All except for one member…Boo, singer and MC for the evening MC Boo remained on stage to orchestrate the Soul II Soul-ites into alternatively singing “However do you want me? However do you need me?” in order to get Jazzie B be and the Soul II Soul collective to return the stage. It worked! After five or six repetitions Jazzy and friends materialised back on stage.

Jazzie B hopped back behind the turntables and addressed the microphone, “What d’ya say? Do you want one more for old time sake or what? Is there any requests? I heard some whispering behind me…What you looking for?!!” 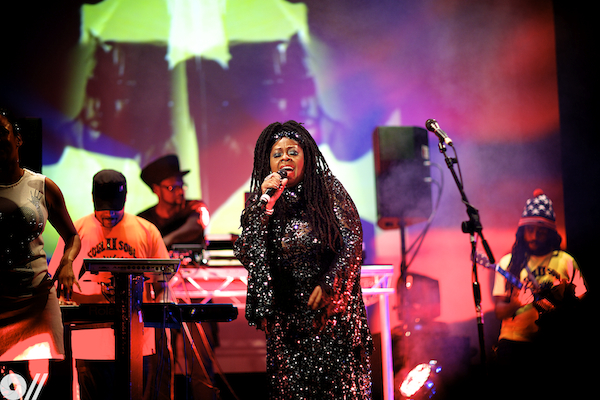 As Soultress Caron Wheeler ghosted into the spotlight once more Jazzie B gave the green light for the full on baseline of Soul II Soul’s 1989 number one UK hit, “Back2Life!” It seemed as if the whole of London was rocking not just a music venue in one corner of North London! The four background singers attired in alternate black and white dresses impressed with some well choreographed and synchronized dance moves throughout the concert and their stylish moves continued during “Back2Life.”

Caron Wheeler threw down some stylish moves of her own midway through the song, gyrating and crouching down like a tigress as well as hitting every note perfectly on this monster track. The audience lapped it up! Her job done, she again thanked the masses and departed stage right. It was left to Jazzie B to name check the remaining band members especially, Simon Law who had flown in from Canada specially for the London gigs, or as Jazzie B phrased it “… from maple syrup land, all the way from Canada, one of my real warriors, my real brethren, The Funky Ginger, Mr Simon Law in the house – Original writing partner.” 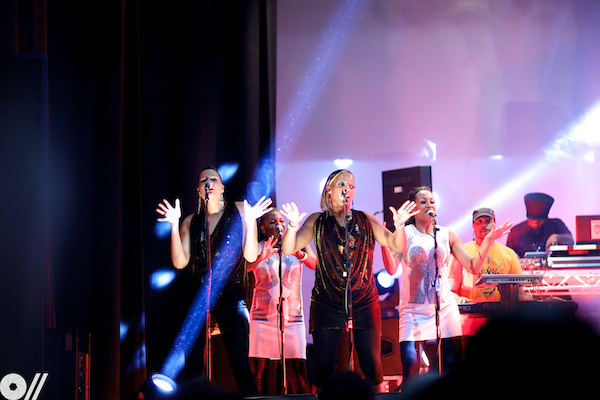 All that was left now is the Jazzie B to descend from his perch one last time to address his public as only he can, to the backdrop of “Jazzie’s Groove.” Leaning on his African cane he proceeded to give a synopsis of the Soul II Soul collective and what their philosophy was – Going on to espouse that he had been around the music business for near on 30 years and posed the question if there is anybody in the audience who remembered that Africa Centre. 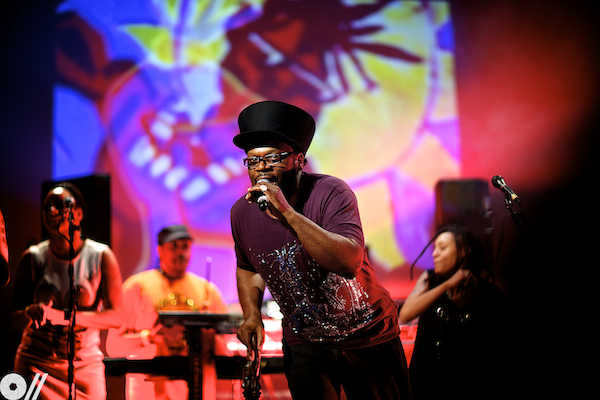 Finally the legend that is Jazzie B signed off with the Soul II Soul mantra, “A happy face; a thumping bass for a loving race!” “Ladies and gentlemen the chime for Soul II Soul is: We are family!” And with that Jazzie B and all three female lead singers; the backing singers and the violinists linked hands across the front of the stage and took a series of well-deserved bows before doing an about turn and this time departing the stage for good, leaving lone guitarist Jasper in the spotlight to bring home the tune and conclude what had been a most memorable performance.

25 years may have elapsed since their sound was the soundtrack to our lives but Soul II Soul’s message and goal of global unification or universal love via the medium of music is and always will be relevant.
Michael J Edwards 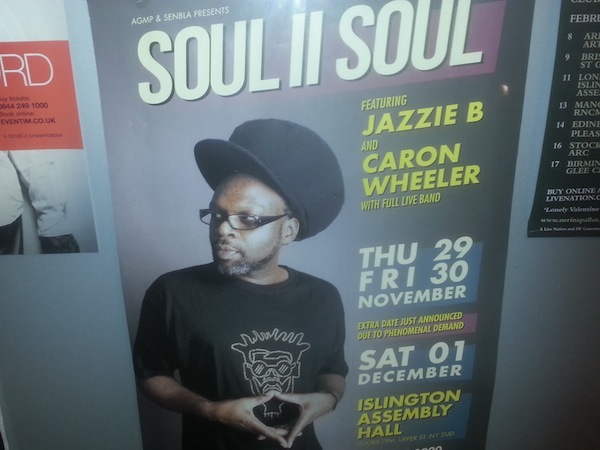 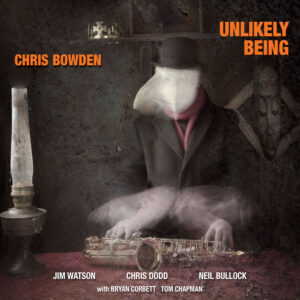